Eversafe has spent years developing and acquiring patents on our state of the art docking and locking technologies.  With 4 issued patents and multiple patents pending there is nothing else like it in the world.  While Eversafe has integrated these patented features into our own product line, the use cases for this technology across the wide array of industries is seemingly endless.  Should your company want to discuss the possibility of integrating the docking and/or locking technology into your product please connect with us to explore that possibility. 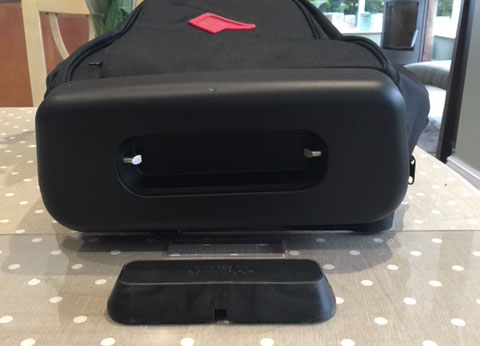 The Eversafe Universal Docking System consists of two parts; the male dock (SafeDock®), which is semi-permanently affixed to a flat surface, and the female receptacle (SafeDock® Base) which is built into the base of the object that is to be secured down to the dock.

The dock is secured down via 2 bolts or screws or can have a steel plate affixed to the bottom and secured via industrial strength epoxy.  Common locations for placing docks include, but are not limited to: homes, offices and vehicles.  Eversafe has also developed a portable SafeDock connected to a steel braided cable that can be used in place of a standard SafeDock when in locations where a dock cannot be mounted, such as, rental properties, rental cars, hotels, etc. On both ends of the SafeDock there are holes that the steel pins of the SafeDock base fit into.

The SafeDock Base is either built in or attached to the bottom of an object that is to be secured to the SafeDock.  The base consists of a single or multiple rebates that fit around the dock(s) depending on the size of the object.  Each rebate has 2 steel pins that retract when setting the object on the SafeDock and then extend outward into the holes of the SafeDock when aligned.  In order for the object to be removed from the SafeDock, both pins must be retracted simultaneously, which is either done via a mechanical release via cable pull or lever, or electronically via a solenoid.  When using solenoids they can be operated via smart technology.  The release should be built into the interior of the object, and in the case of using for anti-theft measures, protected via a lock.

The Universal Docking System is designed to allow manufacturers a way to secure their products down to prevent theft, but can also be used to simply prevent movement in vehicles or a means to enable secure stacking.  By attaching SafeDocks to the top of an object, it enables the ability to easily stack items on top of each other securely.

The Eversafe Multi-Point Locking Mechanism is a fully internal locking mechanism designed to secure hinged hard cases.  The lock consists of 3 or more static pins along the bottom edge that insert into the lock when the lid of the case is closed and secured via a slide bolt.  In order for the lid to be opened the slide bolt must be moved sideways to allow the pins room to release simultaneously.  The slide bolt is designed to be driven sideways electronically via solenoid or by manual key turn.

When using solenoids to power the lock manufacturers have a wide array of technology options to send the authentication signal.  This can be done via PIN codes, Bluetooth, RFID, etc. to enable smart controls.  For manual key entry the lock cylinder is interchangeable to allow for the manufacturer to choose a preferred key and level of security.  The Eversafe Multi-Point Locking Mechanism is capable of being implemented with both options, allowing for smart controls, but manual key override in emergencies.

As the locking mechanism is fully internal, it provides an extremely high level of security due to the inability to tamper directly with the lock while engaged.  Coupled with the Eversafe Universal Docking System, your cases can have the highest level of security, preventing access to the case and theft of the case in its entirety.

License Our Unique Docking System For Your Needs!
Email Us Today!

We use cookies to ensure that we give you the best experience on our website as well as to complete a purchase. If you continue to use this site we will assume that you agree with the use of cookies.Ok